I’ve been advertising my books with Amazon Marketing Services (AMS) for the past six months. Product Display ads appear to be the holy grail, and they’ve taken off for me once. Once. I think I know why.

CAVEAT: This is all speculation. I have no concrete evidence about what Amazon is doing with regards to Product Display ads, other than interpretation of my own data. However, if enough data can be collected, perhaps some insight can be attained. This is also not an optimal book launch. Your mileage may vary.

There are two kinds of AMS ads that can be used for ebooks: Sponsored Product ads (SP, or commonly referred to as keyword ads) and Product Display (PD) ads. Both operate on a bidding system for clicks.

SP ads show below the “Also Bought/Viewed” books on a product page under a heading of “Sponsored products related to this item.” SP ads also display at the bottom of search results. PD ads show on the right side of the screen under the buying options, a couple of banner spots that are difficult to find, as well as on the Kindle lock screen and home screen.

There are a couple of important aspects to note about the PD ad. First, they don’t always show up. I can only guess that this is due to the book either being unpopular, being in an unpopular sub-category, or it’s not selling well. In addition, other Amazon product ads positioned around the customer reviews are not shown as well. This makes sense. Why display ads on a product’s detail page that isn’t getting enough eyeballs? Of course there are exceptions. Many “Big 5” published books have PD ads show up even with poor ranks and extremely popular indie-published books do not.

Second, the PD ad spots are finite. There’s a limited number of them to go around, and they go to the most popular and highest bidder. For argument’s sake, let’s assume only the top 100 books receive PD ads displayed on their detail pages. The competition from other books for visibility will fierce. It’s like trying to get into the most popular club in town. The lineup goes around the block and there’s no guarantee of getting in unless you’re famous or you’re willing to pay the bouncer. Contrast that to an SP keyword ad, where the ad “carousel” expands and shrinks as needed ordered by highest to lowest click bids. It’s easy for anyone running an SP ad to get exposure with the right keywords and bid, but it’s far from optimal.

PD ads get worthwhile impressions (>1000 per day) only if the book that is being advertised is selling.

Is there a correlation between rank and PD ads being shown? I think there is, based on my limited data set for my most recent book David’s Summer, and knowing Amazon’s goal is to sell the most books as possible. In the first graph, there is a huge rank change on October 1, my launch day. I had a short one-week pre-order going to help stabilize the sales graph. In hindsight, I should have had a longer pre-order duration to give Amazon lots of data to work from.

The data from PD ads on the AMS dashboard is delayed by three days. In the second graph, I shifted the impression data by three days and the correlation becomes more clear. My PD ads begin to take off on October 1 and continue through to October 10, where things begin to decline. Impressions decrease and rank falls to a low of 67,439. 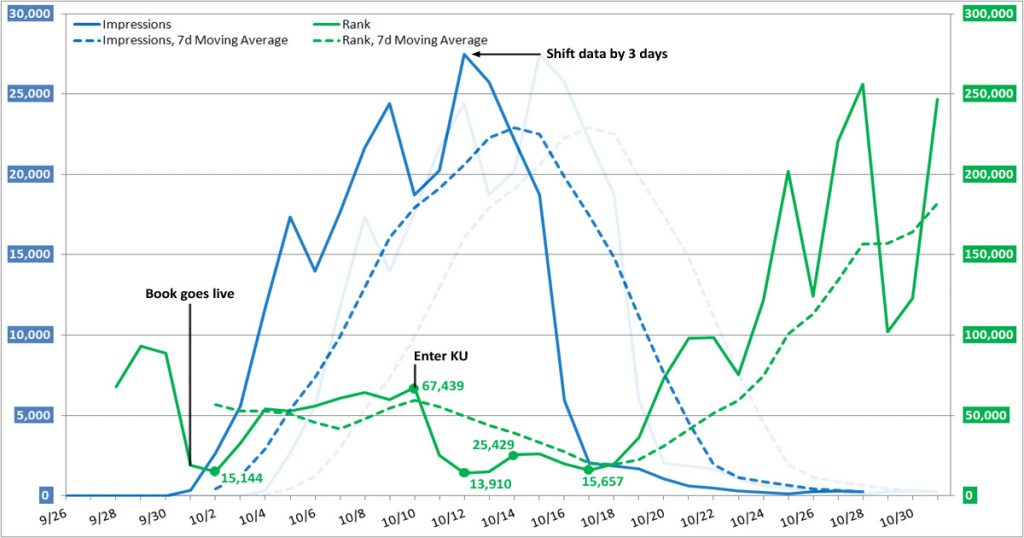 On October 10, I realized that David’s Summer was not enrolled in Kindle Unlimited (KU), so I enabled it. Two days later I achieved the highest rank of my launch, 13,910. Another two days later, rank had dropped to 25,429 and my PD ad impressions began to drop as well, even though my rank held reasonably steady for three more days before it started to fall once again. It could be that KU borrows don’t have as strong an effect on rank as sales do, or the PD ads had run their course, having a limited lifetime of two to three weeks. Probably it was a combination of both.

During the eighteen day period my twenty PD ads were actively serving, I had ten bidding $0.20 and ten bidding $0.22. I had added the second set of ads at $0.22 because at the time I didn’t understand how PD ads worked. There is a good chance I could have received good activity if I had bid lower. I’ll have to test that out at during a future launch.

I have a new book due for release in the new year and I will be employing these ideas for its launch. I’ll post more about it then.

Meanwhile, have you experienced data like this? I’d love to hear about it. If we can get enough people with similar data across many different genres, it’s almost as good as knowing the secrets beneath the algorithms.

One more thing. If you’re looking for a quick way to collect keywords for SP ads, I would suggest the ASIN scraper from Kindletrends.com.